“Schedule Risk Analysis is a technique which takes into consideration task and activity duration uncertainties by substituting the single-point (or deterministic) duration estimates for those tasks or activities with probability distributions representing the range of potential durations – then combines (adds and/or merges) the durations in accordance with the task network structure to produce probabilistic confidence levels for achieving milestone completion dates.”

For Chrono™, the deterministic single-point task duration values are referred to as the “nominal” task durations, and when they are appropriately networked together using the IMS (Integrated Master Schedule) tool, they comprise the “critical path” of the schedule and give us an expected project completion timeline and date. This typically turns into the project team’s commitment, and as we will soon discuss, normally these schedules can have a very low likelihood of being met (especially if the project is complex and risky) – not due to the people, but due to the inherent unreliability of most single-point task duration estimates for risky tasks.
Good schedule planners realize that the riskier tasks have a range of potential durations, or in other words, a distribution of potential durations – i.e., a task duration PDF (Probability Density Function). If you could model these PDFs and somehow embed them into the IMS, with the right tool you could run a simulation to observe their effects on the schedule. Well, this is precisely what an SRA tool enables – and the Chrono™ SRA tool performs this function in a unique way.

Here is an example of a Chrono™ SRA graphical output:

We (Project Managers, Program Managers, Portfolio Managers, Team Leads, Subject Matter Experts and Functional Managers of Project Team Members) tend to develop product development plans by estimating specific (or deterministic) timelines for completing the individual tasks, then linking them together to generate the project schedule. We typically commit to these timelines (irrespective of single-point estimation inaccuracies), and always expect that a good team of people will deliver as estimated/planned. Now, when the stakes increase and schedule execution becomes imperative (as indeed happens more and more, for our competitive world is always trying to “Do More with Less” to gain business advantages over others), do we always come through? Probably not as much as we would like. We will now investigate some of the usual culprits, and how to use SRA tools to counter them.
The time it takes to perform a project task (i.e., the task duration) can vary considerably due to many factors (e.g., performance inefficiencies, scope omission, poor estimation assumptions, differences in resource capability, technological hurdles, etc.). The best-case durations are influenced by Opportunities and the worst-case durations are influenced by Risks. In today’s highly competitive environment, our plans tend to carry a lot of risk, and our nominal single-point estimates tend to be as well. Thus, using an SRA tool with relatively simple triangular probability distribution functions based on best-case, nominal and worst-case duration estimates can help combat this issue.
If we estimate the nominal, best-case and worst-case durations to complete a task, we can create a triangular distribution for all likely task durations. To do this we plot the best-case duration on the x-axis (time) with “0” y-axis value, the nominal duration has a positive y-axis value, and the worst-case duration has a “0” y-axis value. Connecting the three values creates a triangle – the task duration PDF (Probability Density Function). An example is shown below. 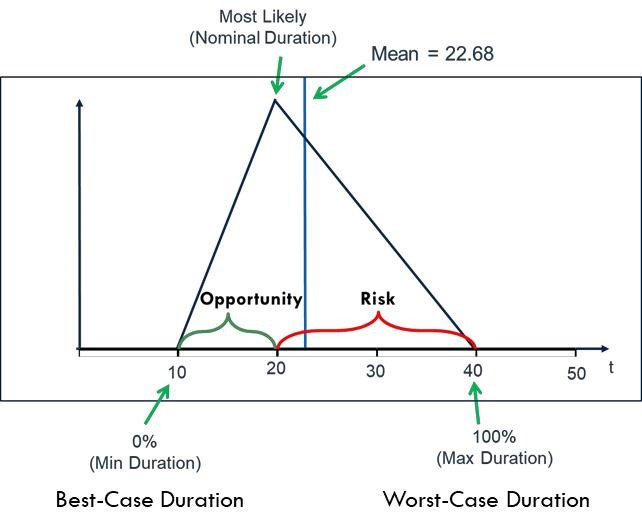 Unless we are very conservative estimators and/or our organization is not striving to “Do More with Less”, our estimates usually have less opportunity (nominal duration minus best-case duration) than risk (worst-case duration minus nominal duration). This means our PDFs are inherently skewed in the wrong direction – i.e., the “opportunity area” of the triangle is less than the “risk area”. Dividing the “opportunity area” by the “risk area” is the % Confidence for completing that task on or before the nominal duration estimate, and it is usually less than 50%. When we cascade this effect through the schedule network the resulting nominal end-date (per the critical path) is typically far less than 50% confidence – for real complex projects it is likely to be less than 1% confidence.
There is another phenomenon that skews (in a negative way) project schedules as well – it is commonly referred to as “merge bias”. This relates to the merging of two or more schedule paths into a common subsequent task start milestone. The closer the paths are to being to the critical path the more pronounced the effect on the % confidence of the completion milestone. 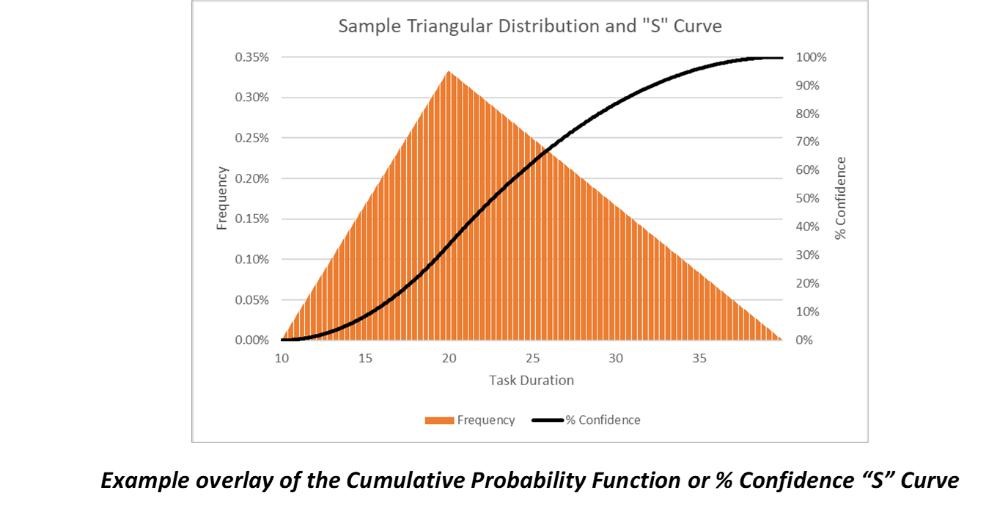 The good news is that from these triangular task duration PDFs we can derive the completion milestone probability distribution, or ‘S’ Curve (% confidence as a function of completion time/date) using an SRA Modelling and Simulation tool. We can make use this tool to either (A) make higher probability commitments by pushing out the commit date(s), or (B) conduct “what-if” analyses and evaluate/implement proactive risk response actions to increase our confidence level. Suffice it to say, using an SRA tool can effectively lead to determination of an achievable (e.g., >50% confidence) project schedule plan. This facilitates the evaluation of alternative improvement plans and improves the likelihood of project success. It also provides the organization’s management team with an understandable metric that effectively communicates overall project schedule risk via % confidence. 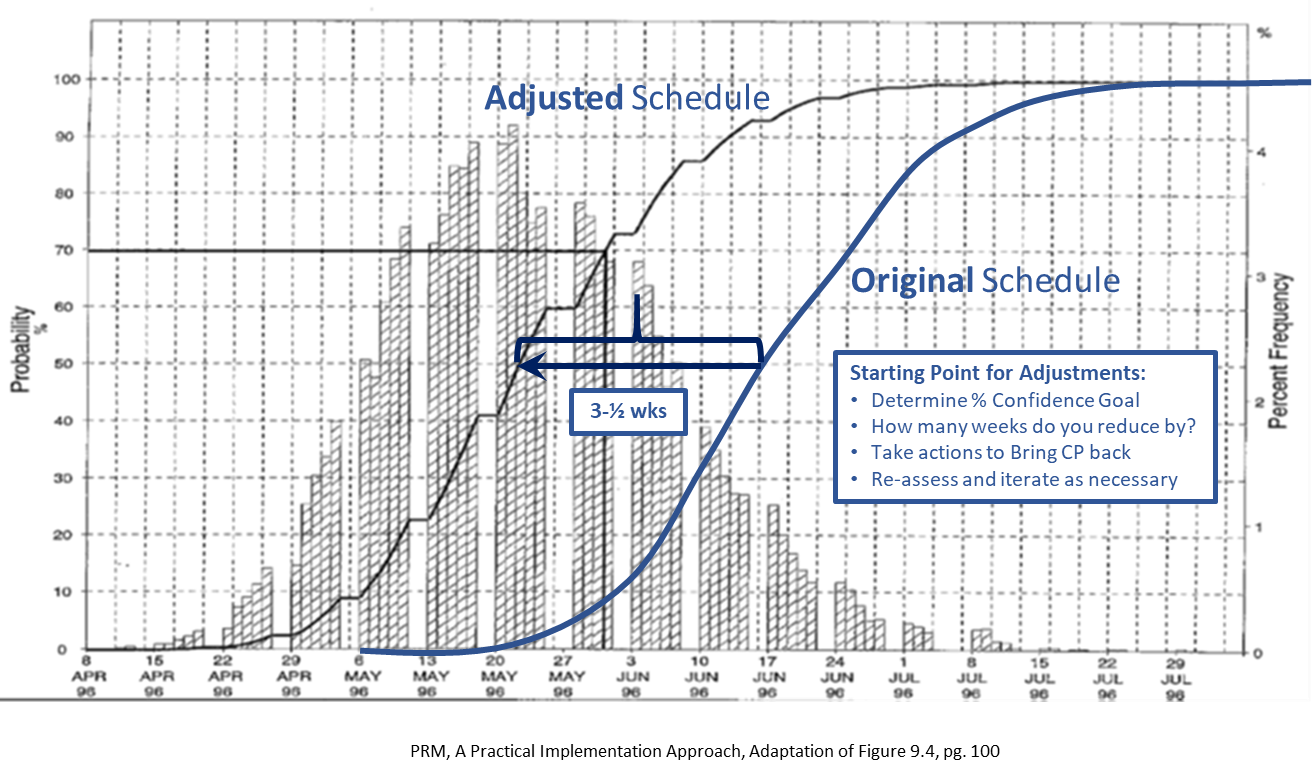 By setting the commitment milestone (project completion milestone) to the goal confidence IMS end-date, the user can then re-run the simulation to see the amount of project schedule compression needed (via implementation of proactive risk reduction changes) to achieve a more realistic schedule plan (e.g., a % confidence of 70% or higher). Once done and approved, the project baselines can be set, and subsequent project progress updates can be made to track performance.  Watch the below video that explains how our co-Founder, Michael Bissonette, used this methodology to boost his career.

Video of the RTConfidence Back-Story 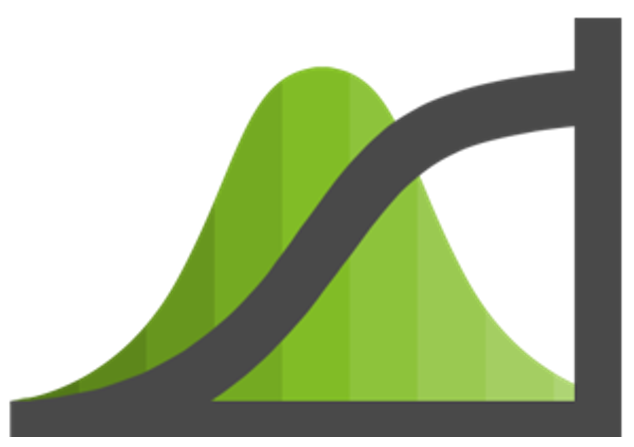